Things I am tired of hearing about Long Distance Relationships 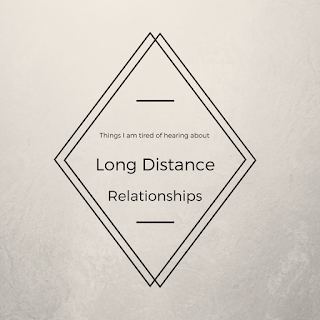 
"How do you know that he isn't cheating on you?"

I hate this one so much because people could be living together and they could be cheating on each other. The truth is I don't know if he's cheating on me but I trust him enough to believe that he isn't.

My response : People could be living down the street from each other and sometimes that doesn't work out either.
Never is such a strong word to say. Some people aren't made for long distance relationships but some people are; therefore, some LDRs work and other's don't.


So, do you have phone sex/Skype Sex?

You don't have an input in this conversation since you live in another country than your Significant other
I am sick and tired of having my relationship dismissed because my boyfriend lives in the UK. I mean sure, it isn't convenient that he isn't with me but at least he's in the same continent ! Some people have relationships with people in different continents ! I follow a couple on twitter where she lived in the USA and he lived in the UK ;  that's a total different time zone ! AND THEY'RE STILL ALL REAL RELATIONSHIPS. Ugh ! There are a ton of people that think that physical contact is everything and that you can't have a relationship without it.