Why they say that I was asking for it. 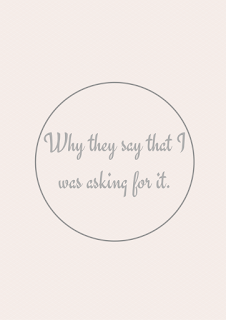 V is a 31 year old man. He has a wife, and he has two kids. V comes from a country whose culture I don't understand.

When he first started working with us, I thought he was coming on too strong; like with his jokes and all. However, my friend told me that maybe that's their way of being friends. So, I let my guard down and allowed him to walk me home one night.

So far so good.

One day, a few days after my breakup, I find myself stranded in the town where my ex lived because my friend decided to ditch me last second. I was worried about being there alone, and I didn’t have time to go home and go back to work (since I worked in that town). So, I texted V because he had been telling me we should hang out outside of work.

We met at McDonald's because that is where I was sat. He sits directly next to me and starts to stroke my thigh. And being very dominant, and he was just not taking no for an answer. Luckily for me though, he didn't do anything harmful.

After that day, I didn't speak to him for months.

In the period that I wasn't talking to him, I got back together with my boyfriend in the U.K.
One day, whilst telling my supervisor that I need a reservation, V comes up to me wanting to talk to me.
So, we spoke, he asked what he did wrong, he apologized, he promised that he will keep his distance.

Flash forward to last September. V had kept his promise. He had been keeping his distance. Sometimes he asked me for a hug, and I would hug him because who am I to turn down a hug.
Anyways, boyfriend comes over from the UK, we go to eat at work. After a week, it's time for him to go back to the UK so he leaves me a huge hickey so high up my neck that my shirts won't cover it. And it was September, I couldn't exactly wear a scarf in the Summer.

I go back to work that same day that Paul leaves. And at around 9 P.M. I am sitting outside, having a smoke, when V comes out and asks for a hug. I told him no because I am smoking but he isn't taking no for an answer. He grabs my arm, pulls me up from the chair to behind the back door of the restaurant (where the camera can't see), and he hugs me. I'm trying to break free like "Excuse me, I said no and I really want to have my cigarette in peace."
Stupid me turns my head to take a drag from my cigarette, and V bites into my neck. At this stage, I am panicking. I was trying to push myself away from him but V used to be a personal trainer and I'm as strong as a baby. I turned my head again (stupid I know) to grab the door and swing it open so the camera behind it would be able to see. This time, V tries to give me a hickey.

I forgot how the whole thing ended but he let me go and I continued to have my cigarette. The next day I told the manager, and I told the supervisor about what happened so he wouldn't put me on the same section as V. Apart from those two, only one other person knew about what happened, my friend.

Flash forward to this weekend.

The supervisor comes up to me and asks me why I'm still not talking to V. I turn to him like "Duh, isn't it obvious?"
But I decided to be civil.

I was out smoking and he came outside. I panicked. I put out my cigarette and tried to go inside. He closes the door and I was about to scream when he thanked me. I was so in shock because why he was thanking me. He then told me a story about a guy who accidentally killed a tiger that was killing village people by chopping down a tree and it landed on it accidentally. But the village people started calling him a hero for killing the tiger.

To be honest, I had no idea where this conversation was heading.

And after he spoke a lot about a lot of things, what I could understand from it all was that people thought I was asking for it. People thought I fancied him. People thought I was the one asking for hugs. Apparently, even the fact that I once complimented his cologne made him think that I liked him. I told 3 people, but apparently, others found out. How?
Let me tell you how because I asked someone from work. This person said, and I quote, "
It was him that said it....he said that you were flirting with him all the time and coming on to him and that you need to be careful with boys…"

Apparently, the way I talk to him made me ask for it. Please bear in mind that I talk to everyone the same way. If I call a guy sweetie, I call a girl sweetie. I talk to my 50-year-old supervisor the same way that I speak to him.  If someone makes a sex joke, I am not going to shy away. I don't need to be ashamed of being a human being with sexual needs. Apparently, If I had an issue with him then I should have told him. It was no the grown-up thing to do to tell the manager.

Erm,  V I told you the first time that you overstepped your limit. The second time made me worry about my safety- I was telling the manager.

So that is what everyone was saying about me.

Let's talk about what no one was saying about him. 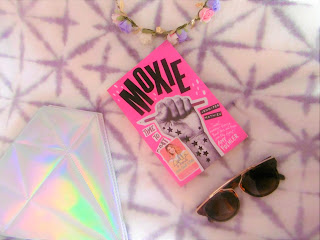 I'd rather move on from this matter.
However, I would like to say a few things to all you out there who experience something like this.