Give me the homosexual stories! (I am not weird, okay? I just love stories between same-sex individuals)
Ok, Maybe I am weird. 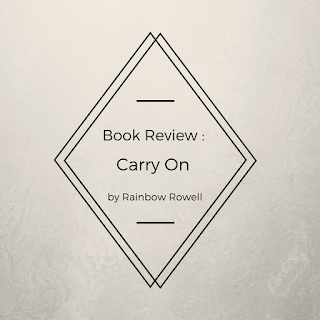 Carry on is a magical novel written by Rainbow Rowell. Carry On narrates the story of Simon and Baz, and their friends; characters originally found in Rowell's novel 'Fangirl'. Each chapter is in a different character's point of view,  narrating in the first person. If you've read Fangirl then you would know that there are 2 mentioned couples; one in the original Gemma T. Leslie - Simon Snow series and the second couple stems from the imagination of Cath and portrayed in her fanfiction. 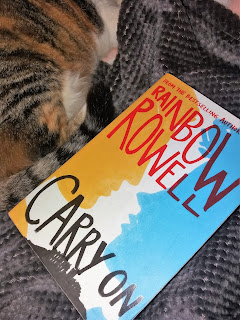 A debate that I have come across is that Carry On has multiple aspects from Harry Potter, and although I used to disagree upon reading it again, I have to agree that many things are similar to the Harry Potter series. However, although the core element of certain characters seem to be as in Harry Potter, (e.g The Mage and Simon's relationship and Harry and Dumbledore's relationship; Ebb and Hagrid), the role of the Character's in Simon's life are different than the roles that the Wizarding World characters had in Harry's life.

Simon is The Chosen One that is meant to rid the World of Mages from the great evil that is The Insidious Humdrum, who takes the shape of Simon.  Carry On is basically the story of how Simon and Penelope try to figure out all they can about the Insidious Humdrum. All this occurs in their last year at Watford, School for Mages,

Baz is Simon's roommate, who is a Vampire, and also Simon hates Baz because he thinks that Baz wants to kill him and that he wants to be with Agatha, Simon's girlfriend, but that isn't the case.

Carry On is full of magic and mysteries, and the curiosity is one thing that will keep you hooked to this 500 pages novel! There are dragons, vampires, ghosts, and a few other mystical creatures. This is a YA book so it is full of teenage drama -love, jealousy, love triangles.

What I love the most about this book is the fact that it keeps you excited about what's to come- every time you think something makes sense, the characters discover something new that needs to be solved, and also, the cutesy romantic scenes. I must say that my favourite character is Baz because 1) he is a vampire, and 2) he is an extremely witty character. I love the relationship between Simon and Baz because they always seem to be spitting hatred towards each other but you can tell that, after being roommates for a number of years, they actually care about what happens to the other.