The Savage Song by Victoria E. Schwab is the first book from a duology, and a beautifully written Fantasy book based in a world not too different from ours. In fact it is our world but when monsters start to roam the planet freely and not remain in hiding like in other stories. Everyone in Verity is aware of the existence of monsters and it is their fault if they are attacked while walking in dark places. The story we read occurs twelve years after an event called The Phenomenon in V-City. 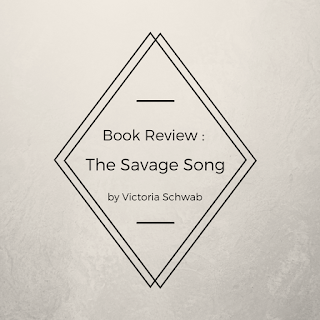 When I posted a photo of this book on Instagram, I captioned it "The human wishes to act like a monster; The monster wishes to act human..."

I think that this caption summarizes our two main characters : Kate and August.
Kate Harker is the daughter of Callum Harker, the most powerful man in the city. August Flynn is the son of Henry Flynn, Harker's enemy. Both of their fathers are 'leaders' of different parts of Verity : Callum Harker leads the North Side of Verity, while the South Side of Verity is lead by Henry Flynn. Kate is human but she wants to act like a monster so that she can please her father and prove to him that she deserves to be in the City, and not sent away to boarding schools to be safe. On the other hand, August is a Sunai, one of the three monsters mentioned in this book, and he tries to not satisfy his hunger in order not to take lives. He aims to act as human as possible. 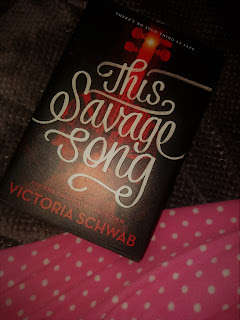 Throughout the book the reader can see the relationship between Kate and August develop naturally while Kate doesn't know August's true nature, but even after she discovers, we can see how she fights with her idea of monsters and how she can apply that to August. However, she learns that August is different than other monsters. The relationship between these two characters is purely non-romantic.

The Savage Song is written with a ton of depth, and everything is so well thought out and everything links together. The monsters are not like the typical mindless monsters that we usually find, instead they are intelligent beings capable of understanding hierarchy and rules. The characters are well developed with strengths and weaknesses.
I'm a huge fan of romance, but in this story I was almost relieved that there was no romantic connection between Kate and August because they didn't need Love, they needed to find out who they are outside the influence of their family. 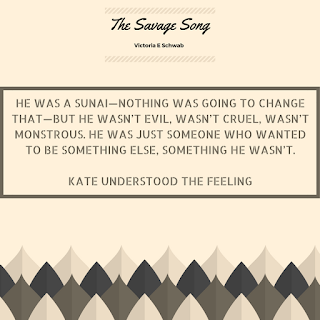