Book Review : If I was your girl by Meredith Russo 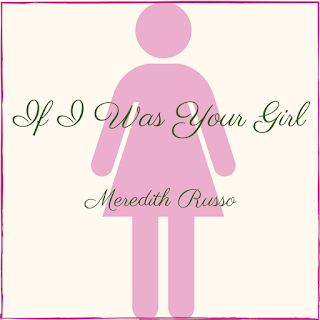 In a world where (hopefully) we are more open-minded , I get excited when I see a book representing the LGBTIQ community. Especially when the author is part of that community. If I Was Your Girl is a YA book written by Meridith Russo. 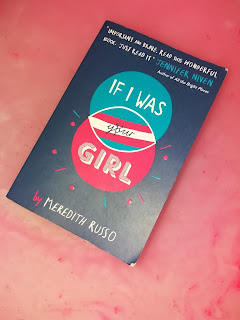 Little bit about the book :

This book is about Amanda, who used to be called Andrew. Things in Amanda's home town turned so bad that she had to move away from there, and her mother, and moved in with her father, who she hasn't seen in a number of years due to her parents' separation,  in a town where no one knows that Andrew Hardy was once a person.

Things in the new town are great as she is making new friends, and has a love interest - all who tell her multiple times that she is totally gorgeous.

Amanda is happy to be herself. However, Amanda's secret haunts her as she is being trusted with many secrets but she won't share her own.

My thoughts on the book :

I loved this book- L O V E D !
This book shows how hard it is to be a Transgender woman, and it shows how their transitioning haunts them. Whether they are going through it where everyone knows them, or if they are in a town where no one knows their opposite sex identity. Throughout the book you see how Amanda struggles to trust her friends with her secret as she is finally happy with her life, and you also see chapters where the author takes you back in time to show you Andrew, and his transitioning and all the emotions that he and his mother felt. Amanda makes it clear what you shouldn't ask when people find out that someone they know is transgender.

I loved the characters, and that all of them had a secret that they were ashamed of. I think that the way that her friends were trusting her with her secrets, and the way that she wasn't judging them , should have been an indication to her that they are true friends who wouldn't mind about who she was.

Let's mention Grant for a moment. Grant is her love interest. Grant is in my 'Top 5 Love Interests' because he is the cutest thing. Well, I thought he was, up to nearly the end where he just let me and Amanda down. I must point out that if you want a Romantic Happy Ending then this book is not for you, the ending is Happy for Amanda and it has an open end so you can simply imagine a Romantic Happy Ending but otherwise, Amanda and Grant end up not being in a good place.

Throughout the book Amanda's father makes it clear that people like her don't have an easy life because of the world's judgement, but despite everything Amanda knows that she is worthy of living her life, even if she didn't think so before.

The best thing about this book is that it shows the strengths and vulnerabilities of multiple characters, and that although Amanda gets a boyfriend she still hangs out often with her friends, something that usually stops in stories once the main character gets a love interest. It shows struggles of being a lesbian, a bisexual, a trans person, a person who comes from a background of strong faith, and a person living with a single parent who is also ill. It just shows multiple struggles of multiple people but it also shows their strengths.

I recommend this book to everyone.This book makes me want to buy multiple copies of it, and leave them in places for people to find (Just like Emma Watson did with the Maya Angelou book in the New York Underground.


Until next time, lovelies.