I don't know if you have noticed but we are in December ! For all you people out there that celebrate it , it is the month of Christmas ! If you are like me then you love all thing Christmas : recipes, films, books, songs. Anything themed Christmas is out this month. So, I have decided to talk about two books that I own that are full of Christmas spirit !

Three short stories written by three separate authors; however, if you pay close attention you will see that the lives of character overlap in the stories. So you will find characters that are mentioned in one story in another story. My favourites are The Jubilee Express by Maureen Johnson and The Patron Saint of Pigs by Lauren Myracle. I initially wanted this book when I was going through my John Green phase but his story in this particular book didn't impress me as much as the other two stories in the book did. Don't get me wrong, it is a good story and at times it is rather funny but it wasn't my cup of tea. 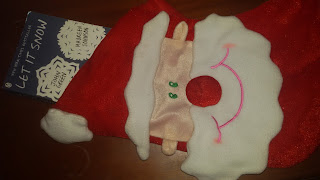 What can I say about this book apart from that I loved it? I love Penny. I love Daisy. I love Henry. So many characters were so loveable. The plot is fantastic; everything connected to one thing or another. I must say that the only thing that bothers me is that it's fairly rushed. The book literally takes place in the space of a week or two, and that's not exactly something I like when there's a lot of romance involved. However, I must admit that it was a really cute love story which helped both the characters get over something great.

The Most Wonderful Time Of The Year by Joanna Bolouri

Review : I LOVE THIS BOOK SO MUCH !!
(This might contains minor spoilers.)

I mean, you know that Sandra Bullock movie, The Proposal? It's like that BUT A WHOOOLEEEE LOT BETTER. The main character, Emily, is a 38 year old teacher who lives in London but is originally from Scotland. Every year her family celebrates Christmas together at her family's house in Scotland where she suffers torment of comments about her being 38 and single. However, this Christmas Emily plans it to be different since she has got a handsome man , Robert, in her life; therefore, plans on being spared from all torture. What Emily doesn't plan is what Robert reveals and how it leaves her in a rather sticky situation as she can't take Robert to Scotland with her. Oh how shall Emily solve her problems?
Let me tell you…not very wisely. I swear this book had me laughing so hard that I couldn't read it in public. I went to the Library at University to read it and I just had to put it away because my stifled laughs were gonna make me burst. I feel like Emily is always on about-to-explode-mode about things, and then Evan, her neighbour, just keeps pushing her buttons all throughout the book. Speaking of Evan, if you love a witty guy then Evan is the guy for you. Oh, how his wit makes me want to Laugh Out Loud..and it did…on many occasions.

Definitely recommend this book to anyone who loves a Christmas romance. The only criticism I have is that it was pretty predictable. I mean, from the start I knew that something was up with Robert and that Evan will eventually be a huge part of the story. Apart from that though, I loved it.

These are just three of the books that I have read that are Christmas themed but I just loved these books so much that I just had to say a little something about them.