Things I am tired of hearing about Trichotillomania

A few weeks ago I had discussed ways that a person can control their urges of pulling hair by doing other things. Living with Trichotillomania is horrible when people don't see it as a psychological disorder, and I hear the same things over and over again by anyone who finds out that I pull my hair out. Today I am going to tell you some of the things that I have had enough of hearing ! 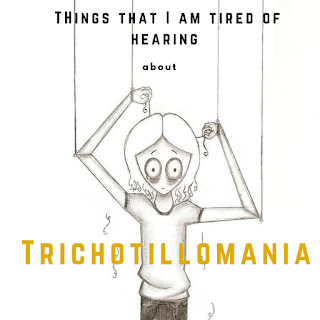 It is extremely hard to explain to people that I CAN'T JUST STOP. Trich is a compulsive disorder and there is no medication to reduce the impulse of pulling hair.

It is worse when someone says "just stop," because I don't people realise how extremely hard it is to try to stop. If a person with Trichotillomania wants to stop then it frustrating for them when they pull hair since they feel like they can control themselves but also feel frustrated because they aren't pulling hair since pulling hair is a way of stress relief.

People think that Trichotillomania is just a habit that we can kick but it takes an enormous amount of effort to even start to think of stopping since most of the time we don't even know that we are doing it.


Okay, I must admit that when you're pulling hair from an area for the first time then it hurts. However, if you always stick to pulling hair from one place only then you get used to it and *as mentioned above* IT FEELS GOOD.