How NOT to be a jerk on the internet 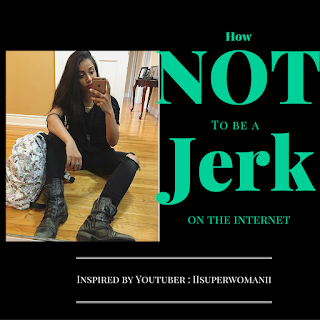 I'm Aby and IISuperwomanII , aka Lilly Singh, is my favourite youtuber. Now, a few weeks ago she posted a video called "How NOT to be a jerk on the internet." and she states at the start that she can't change the world with that video because of a number of reasons BUT we , people who watch her videos, can change a tiny portion of the world by sharing her video and emphasising the importance of the eradication of negativity on the internet.
You might want to watch her video before reading the rest of this post.....so I'll see you in 15 minutes....

I actually want to know who decides that it's better to take out their phone and film something horrible happening rather than helping. The internet world has given us this illusion that we must get likes, shares, retweets, reblogs and all the other ways of approval on the web that it has taken away from us a shred of humanity. I mean, some one must be lacking some humanity if they think "Oh damn that girl is getting beat up. I should take a video and post in on Facebook." and then they caption it with "Like if this shouldn't be happening."


Spread things that make you happy and smile, instead of things that you see in a negative nature.
Instead of sharing negative videos you should share :

And this doesn't simply apply to the sharing of videos but also when posting statuses. I cannot tell you how many times I have come across people spreading hate through FaceBook statuses and Twitter posts. There is enough hate in the world and on the internet, and I think that the content we post and share can influence others a whole lot more than we think it does.


I don't think I have anything to add from what Lilly said in the video since I agree on it so much. I know that most of us live in a society where we have Freedom of Speech but when your opinion is going to be irrelevant, stupid, or mean then you should not press on those little squares on your keyboard. Make Love, Not War. The world doesn't need anymore negativity on the internet, okay? So, stop with the hateful, hurtful comments and start with the positivity spreading because in the world we live in today we need all the positivity and lack of hate that we can get. This also refers to replying. Don't reply to that person who has just said something mean to you in the comments. Just unfriend....which leads us to point #3.


Basically this means to ignore what you don't like. Many people feel like they need to react to everything so they comment on things that they don't like when in reality they should be removing the thing that they like by Closing the window, unfriending, unfollowing, etc etc.

One of my closest friends used to be the victim of my constant ranting of things I didn't like on Facebook and her reply was always "that's why I unfriend people." That is how I went from around 2000 friends on facebook to about 900. There were so many people that I didn't know and shared negativity on my news feed that I just took them all off. I would also like to say that I have also unfriended family members for that reason.

We need to make the world a better place to live in and the internet is a huge part of our world right now that we should start making it safer and more peaceful.

This is something that I rarely do, and that is telling you to go share IISuperwomanII's video on this. I truly believe that we need to share that message, and I'm not only promoting this because she is my inspiration.