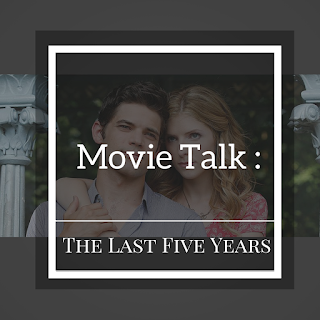 We all have those moments when we have tons of things to do but we find ourselves watching any movie that crosses our path. That movie of the day for me was The Last Five Years.

This movie is basically the love story of Cathy and Jamie BUT IN MUSIC FORM. Like literally just music..just singing. Which I must admit did get quite annoying after like half an hour but I did watch it all. The movie shows the relationship of Cathy and Jamie from start to end...and this isn't a spoiler that he leaves her. The movie literally starts with her singing and crying. You get to see the good times and bad times between them and how and why their relationship failed.

I don't know why I'm surprised that their singing involved. I mean Cathy is played by Anna Kendrick, who in the movie designs dresses, and loves to perform. Jamie is a writer who is getting his book published and he is cute. I mean, he is played by Jeremy Jordan and I had no idea who he is but as soon as I heard him sing I was sucked in.

Even though I found the constant singing kind of annoying, I believe that this movie was simply amazing. AMAZING. You have to pay close attention because it isn't their story in sequence...each song is a part of their relationship and they go back and forth. It is exhausting but WORTH IT.

I am so confusing. I mean I am saying it is annoying and exhausting but I also found it amazing ? This is a first. Haha !

Seriously though it is amazing and you should watch it.
And let me know your favourite song from it ! Mine is the one that Jamie sings after Cathy comes in from work, about the dress maker. Shmule I think it's called.