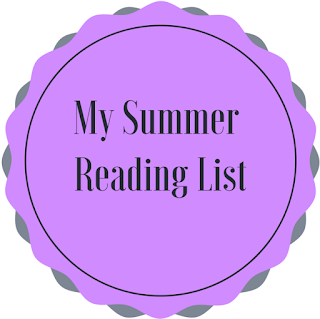 Ahhh, the summer holidays have finally begun. I know it's nearly the end June but I have  just finished my finals !
Summer Holidays for me have consisted of 3 things these past 3 years : books, taking care of my sister/grandma, and studying to resit exams in September because I attract failure in my finals.
However, this year will be a bit different since I have found myself a job ! Woohoo. The good thing about this job that it's 3-5 hours a day so I can earn money and enjoy the summer.

Let's say I sleep for 8 hours a day and work for 5 hours a day, that is a total of 13 hours. That means that I have 11 hours a day to read and catch up on all the reading I missed during the scholastic year.

Listed here is a list of books that I plan on reading this Summer.

These books I bought from the bookshop. Now I must admit that I have judged these books by their cover. I was desperate to buy books and I didn't know what to buy and I didn't want to leave the store empty handed so I chose these because they have pretty colours. I have read the synopsis (I didn't just buy them without having a clue what they were about) and I have a feeling that I am going to love them. I am not sure about The Piano Man Project yet but I am sure that it is beautiful.

"......All Amber wants is a little bit of love. Her mum has never been the caring type, even before she moved to California, got remarried and had a personality transplant. But Amber's hoping that spending the summer with her can change all that.

And then there's prom king Kyle, the guy all the girls want. Can he really be interested in anti-cheerleader Amber? Even with best friends Evie and Lottie's advice, there's no escaping the fact: love is hard. "

"..... Honeysuckle Jones has a problem, and her best friends Nell and Tash are on a mission to help her solve it. She needs a man – a caring, intelligent, funny man. But most importantly, a man who’s good with his hands…

Luckily Honey’s new neighbour – moody, antisocial ex-chef Hal – fails on almost every count. Even though the chemistry between them is electric, he’s obviously wrong for her in every way.

But when Honey discovers the devastating reason for his moods she decides to give him another chance. And discovers that the best songs aren’t always in tune…"

"Sarah is doing just fine. Sure she's been single for the last five years, and has to spend an uncomfortable amount of time around her ex-boyfriend, his perfect new girlfriend and all their mutual friends. And yes, her job as a PA to one of the most disgusting men in London is mind-numbingly tedious and her career is a constant disappointment to her mother. But it's really okay. She's happy (ish).....

.....But it's not surprising that when Sarah starts dreaming about a handsome stranger, she begins to look forward to falling asleep every night. Reality isn't nearly as exciting. That is until her dream-stranger makes an unexpected real-life appearance, leaving Sarah questioning everything she thought she wanted."


The only reason why I am going to read the following book is because I am in love with Magnus Bane. He is my favourite character in The Mortal Instruments and in The Infernal Devices. He is one half of my OTP. I am literally only going to read this book because I have a Magnus sized whole in my heart which has been there since I finished The Mortal Instruments. I owe my friend my life for lending me this book.
"....This collection of eleven short stories illuminates the life of the enigmatic Magnus Bane, whose alluring personality, flamboyant style, and sharp wit populate the pages of the #1 New York Times bestselling series, The Mortal Instruments and The Infernal Devices...."

Surrounded by enemies, the once-great nation of Ravka has been torn in two by the Shadow Fold, a swath of near impenetrable darkness crawling with monsters who feast on human flesh. Now its fate may rest on the shoulders of one lonely refugee."

This beautiful trilogy has ended up on my bookshelf because I saw a cute,romantic quote from one of the books on WeHeartIt and I JUST HAD TO HAVE THEM. So, now I have them and I can't wait to read them and ship the F*** out of whoever is in love.

I am breaking my own rules by reading these books...because they are ebooks. I sure hope that they don't cause me to much feelings because I don't want to throw my tablet across the room as I sometimes do with books. Now, these were all goodreads recommendations. I have previously read books by Colleen Hoover and Jennifer E. Smith so that explains why they are listed below.

"When Tate Collins meets airline pilot Miles Archer, she knows it isn’t love at first sight. They wouldn’t even go so far as to consider themselves friends. The only thing Tate and Miles have in common is an undeniable mutual attraction. Once their desires are out in the open, they realize they have the perfect set-up. He doesn’t want love, she doesn’t have time for love, so that just leaves the sex. Their arrangement could be surprisingly seamless, as long as Tate can stick to the only two rules Miles has for her..."

"Jonah never thought a girl like Vivi would come along.

Vivi didn’t know Jonah would light up her world.

Neither of them expected a summer like this…a summer that would rewrite their futures.

In an unflinching story about new love, old wounds, and forces beyond our control, two teens find that when you collide with the right person at just the right time, it will change you forever."

"Irreverent, foulmouthed seventeen-year-old Cricket is the oldest ward in a Catholic boys’ home in Maine—and his life sucks. With prospects for the future that range from professional fighter to professional drug dealer, he seems doomed to a life of “criminal rapscallinity.” In fact, things look so bleak that Cricket can’t help but wonder if his best option is one final cliff dive into the great unknown. But then Wynona Bidaban steps into his world, and Cricket slowly realizes that maybe, just maybe, life doesn’t totally suck."

"Lucy and Owen meet somewhere between the tenth and eleventh floors of a New York City apartment building, on an elevator rendered useless by a citywide blackout. After they’re rescued, they spend a single night together, wandering the darkened streets and marveling at the rare appearance of stars above Manhattan. But once the power is restored, so is reality. Lucy soon moves to Edinburgh with her parents, while Owen heads out west with his father...."

"Seventeen-year-old Caymen Meyers studies the rich like her own personal science experiment, and after years of observation she’s pretty sure they’re only good for one thing—spending money on useless stuff, like the porcelain dolls in her mother’s shop.

So when Xander Spence walks into the store to pick up a doll for his grandmother, it only takes one glance for Caymen to figure out he’s oozing rich. Despite his charming ways and that he’s one of the first people who actually gets her, she’s smart enough to know his interest won’t last. Because if there’s one thing she’s learned from her mother’s warnings, it’s that the rich have a short attention span. But Xander keeps coming around, despite her best efforts to scare him off. And much to her dismay, she's beginning to enjoy his company...."

These are some of the books that I am going to read, and I'm pretty sure that I will have read so much more by the end of the summer.
Let me know what's on your Summer List in the comments below or on any of my social media.